Moving my blog over to shawnmativetsky.com

Dear friends,
With the recent update of my website, I now have the ability to integrate the blog directly into the website, so that is what I am doing; it just makes sense. I will no longer be posting updates here. Thank you to all of you for your interest in my musical adventures. Please click along to my website for the continuation of this blog in the future! If you would like to update your RSS subscription, this is the new RSS URL: http://shawnmativetsky.com/blogs/blog.atom
I hope to see you over at shawnmativetsky.com!
Shawn

This past Saturday, August 3, I accompanied bansuri player Chloé Bennett for her Indian music début in her hometown of Montreal. She has been living in India for the past five years, studying with legendary bansuri maestro, Pandit Hariprasad Chaurasia. She is currently in town for a few weeks, visiting her family, and so we took this opportunity to set up a couple of concerts for her.

This first concert took place at the Sivananda Yoga Centre in downtown Montreal. The concert was really well attended, as many of Chloé's friends and family have never heard her play Indian music before. It was a very special occasion and Chloé did really well, engaging the audience with both her words and her music. She opened with raag Malkauns, with an alap-jor, followed by compositions in Jhaptaal and Teentaal. I particularly enjoyed the Jhaptaal composition; it's one of those that really sticks in your head, even hours after the performance. The Teentaal was a bit odd, as the melody began on khali, and so had a feeling of being flipped around backwards (this is not unusual). She then followed with raag Bageshri in Rupak, a thumri in Pilu, and then a Bengali folk song to conclude.

We were accompanied by flutist and bansuri player Marie Saintonge, which was a very welcome surprise for me. 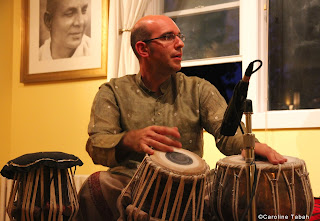 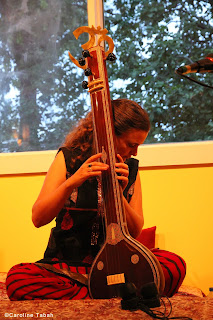 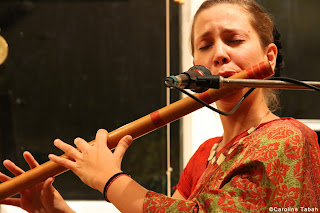 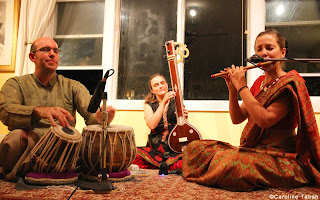 If you missed this concert, there is still another chance to hear Chloé before she heads back to India. We will be playing at H-OM Yoga in Vaudreuil-Dorion (3187 Harwood), on Friday, August 23 at 8pm. 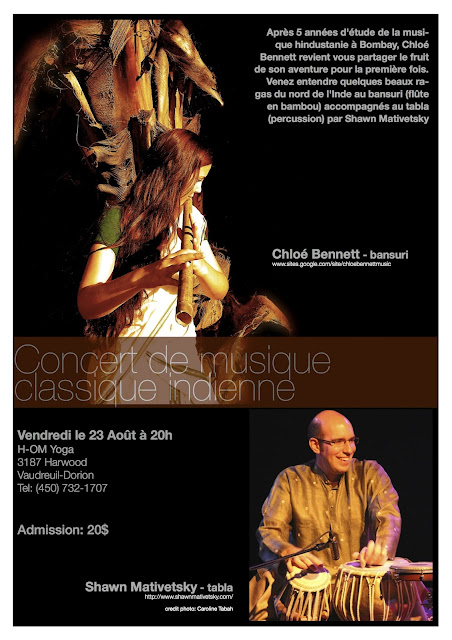 I am really looking forward to it, and hope to see many of you there! For those of you in Montreal, it will be worth the trip! Here is a link to the Facebook event page, for those of you on Facebook.

As usual, thank you to Caroline Tabah for the photos!